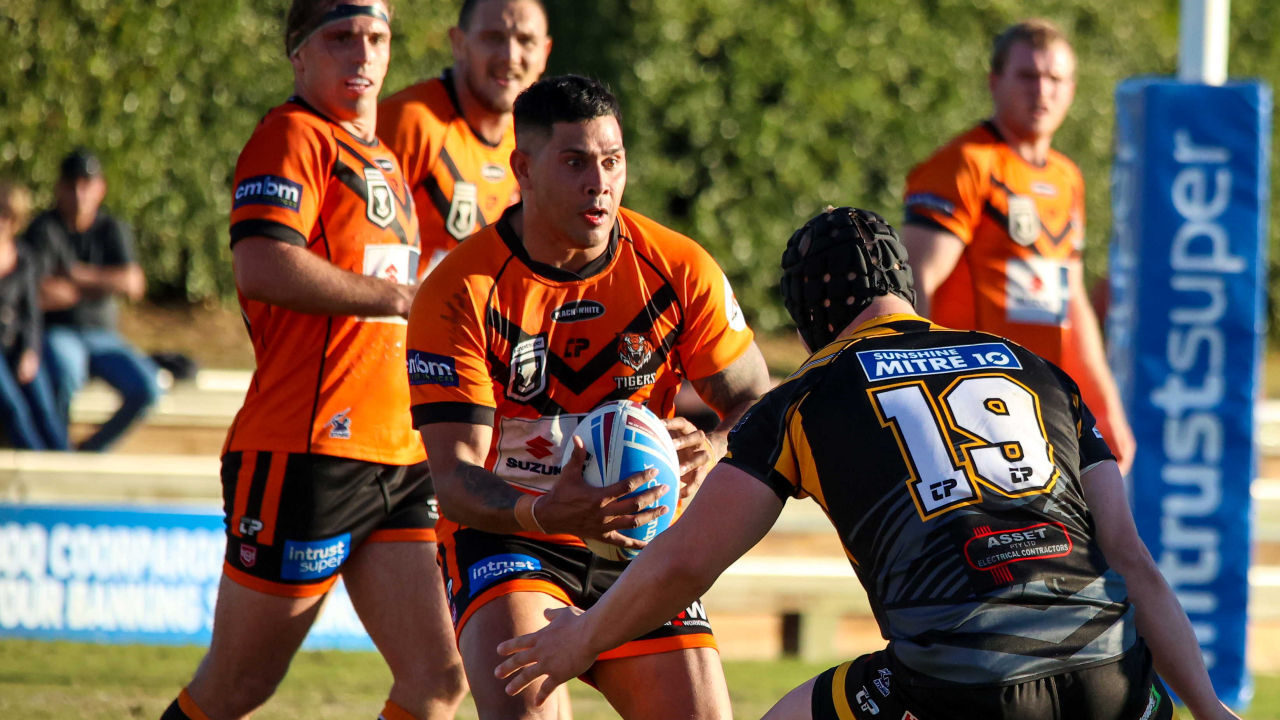 Buchanan: “need to find a way to win”

“It was a pretty ugly game to be honest, but sometimes you’ve just got to find a way and grind it out…. after a disappointing few weeks it was nice the boys found a way,” Mawhinney said.

“At half-time I just spoke about completing our sets and having better ends to our sets… we were just sort of rolling down the field okay in the first half, but we had pretty ordinary kicks and run options on the last, so we just needed to tighten those up a bit.

“We saw signs that Tigers were a bit fatigued and they had a couple of injuries, so they were under the pump. We just needed to complete and build a bit of pressure, which the boys did.”

Cooper Johns, Luke Polselli and Nat McGavin were the other try-scorers for the Falcons. Zac Taibi, Brenko Lee, Michael Purcell and Ioane Seiuli crossed for the Tigers.

“I thought there were some pretty good contributions from everyone today,” Mawhinney said.

“Everyone’s got to be accountable within the 17… Wyatt Reynolds on debut got two tries, which is pretty special.

“Tepai Moeroa debuted for us and he was outstanding, I thought, off a pretty short build up. Kurt Baptise was dynamic through the middle… I thought he was the difference today.”

The Falcons will face Townsville Blackhawks in Round 11.

“Townsville are a strong side… they’re always strong, Townsville, so we’re probably fortunate we’re going to play them down here,” Mawhinney said.

“They’re strong through the middle and they’ve got pretty classy halves in (Shaun) Nona and (Kyle) Laybutt. They’ve got pretty good threats across the park so we’ll have to make sure we’re completing and defending well.”

After the match, Suzuki Brisbane Tigers coach Jon Buchanan said his team needed to find ways to win these matches regardless of injuries sustained during the match.

The Tigers lost forward Cameron Torpy in the 16th minute after failing his HIA, before also losing five-eighth Ryley Jacks 11 minutes later to an ankle injury and fullback Michael Purcell in the 60th minute to a knee injury.

“We did really well to get back to 18-all (after the injuries), but then lost our way and kept turning the ball around,” Buchanan said.

You can find more photos here.

The Tigers will travel to BMD Kougari Oval for their Round 11 match against the Wynnum Manly Seagulls – Sunday 20th June, 2:10pm.

This match will be live & free on Kayo, 9Now and QPlus from 2pm.