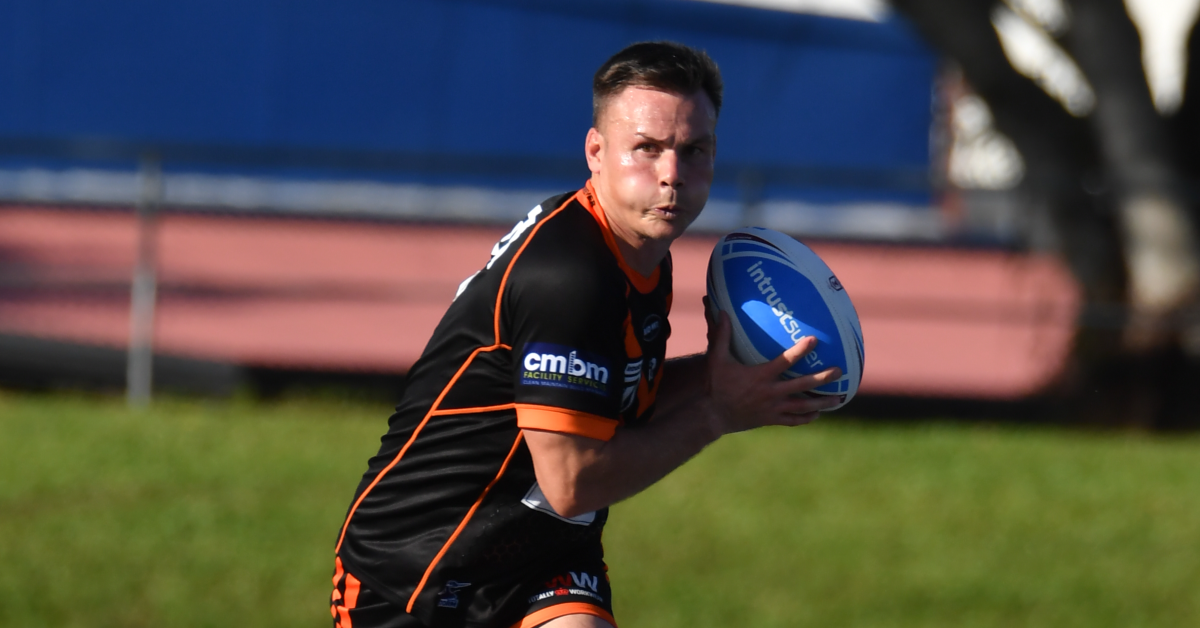 Brisbane Tigers travelled to Cairns for a Sunday afternoon matchup against Northern Pride at Barlow Park and were met with a strong opposition as the home side prevailed 24-16 at Barlow Park.

With a bumper crowd in attendance, warm weather, and a good breeze the Tigers were unable to complete sets and allowed the Pride to dominate possession in the first 20 minutes.

After 10 minutes of football, the visitors had held the ball for less than six tackles in attack, but weathered numerous line attacks and were fortunate not to be at least two tries down.

Pride second rower Ewan Moore, who has been in good form, had twice spilt the ball attacking the line, fumbling two certain tries and allowing the Tigers to regroup and weather the attacking storm.

The Northern Pride continued to dominate attack, but failed to capitalise on opportunities; and after 11 minutes of play hooker Jayden Hodges crossed the line, only to be held up and unable to ground the ball.

The next set of six for the Tigers saw Pride’s fullback placed under pressure just out from his line with a high bomb and visiting winger Isaac Lumelume was able to come over the top of Jayden Corrigan as he went to ground.

Unfortunately, the Pride fullback sustained a heavy knock to his lower back, requiring a stoppage of play and on-field treatment. The referee ruled no intent in the contact and play was restarted.

Against the run of play in the first half, second rower Mitchell Frei slid over for the Tigers allowing kicker Michael Purcell to slot the conversion, and the Brisbane Tigers were first on the board at Barlow Park.

It was a tough five minutes for Pride’s Corrigan, being cleaned up again, this time just out from the Tiger’s line. Lumelume’s tackle hit Corrigan high, halting play once more as the fullback received attention; and was taken from the field for a HIA, taking no further part in the game. Lumelume was sent to the sin bin and placed on report.

After the penalty, Pride built the pressure, working the short side for consecutive tackles before five-eighth Tom Steadman kicked across field. The ball could not be taken by Tigers’ winger Marion Seve allowing Pride’s Bernard Lewis to pounce on the ball in-goal and score.

The conversion was unsuccessful however, and the Pride trailed 6-4.

The Pride continued to attack, with the Tigers’ still one man down and two minutes later, from 10 metres out, Steadman threw a rocket a cut-out pass, to find Lewis in open space to cross in the corner and put the Pride clear by eight points to lead 14-6.

With the restart, the Tigers were back at full strength with Lumelume’s return from the bin.

With a full team on the field, the Tigers were able to build pressure, marching down field and the score line was given respectability after Tigers’ centre Solomona Faataape was able to bump out of a tackle, spin and cross in the far corner. Purcell missed the conversion attempt, and the Pride were still up 14-10.

A penalty five metres out from the Tigers’ line allowed Hodges to burrow over to put the Pride back up by eight and Steadman made certain of the extras to put the Pride in front 20-10 with the halftime siren soon to blow.

The second half looked to be more of the first after the opening minutes of the half, with Pride’s hooker held up again over the line after a strong drive from the Pride.

The Tigers regained their composure and completed their sets, however could build sufficient pressure to convert opportunities.

Minutes later after completing a strong set, the Tigers were attacking the line, and cross-field rocket pass found winger Zac Taibi in the open, with the back leaping and acrobatically grounding the ball to lift the Tigers scores and morale.

Purcell converted and the difference was back to only four points.

Errors continued for both team leading to stop-start football. The arm wrestle was dominated by the Pride resulting in a further scoring opportunity.

Terrence Casey-Douglas crossed with 10 minutes to go, proving too powerful for the defence.

The margin remained unchanged for the remaining eight minutes after the restart.

The Tigers could not capitalise on opportunities, with the Northern Pride holding onto run out winners.

In a battle of the Melbourne Storm feeder clubs, the Tigers will host the Sunshine Coast Falcons at Totally Workwear Stadium for their Round 10 match – Sunday 13th June, 2:10pm.

Suzuki Brisbane Tigers Colts pushed back in the winners circle after a 10-try blitz effort against the Northern Pride at Barlow Park.

The side welcomed back hooker Haele Finau who dropped out of the Intrust Super Cup squad on game day after being replaced by Brayden Torpy.

With the relocation of NRL feeder club Melbourne Storm to the Sunshine Coast, the Tigers also welcomed back allocated player Dan Atkinson, as well as Jonah Pezet for the first time in Tigers colours.

The Tigers side were on from the get go with winger Ronald Philitoga opening up the scoring in the 2nd minute of the match.

It was an onslaught from a dominant Tigers outfit running out 54-28 winners over Pride in their round 7 clash.

The Tigers will host the Sunshine Coast Falcons at Totally Workwear Stadium for their Round 8 match – Sunday 13th June, 12:00pm.

In a battle of the Suzuki Brisbane Tigers feeder clubs, Bulimba proved too strong defeating Carina in their round 8 match at Leo Williams Oval.

Bulimba player Oliver Pascoe, who has been training fulltime with the Suzuki Brisbane Tigers ended the match with a handy hattrick.

The match however never lost its fiery encounter as the match ended with three sin bins and one send off.