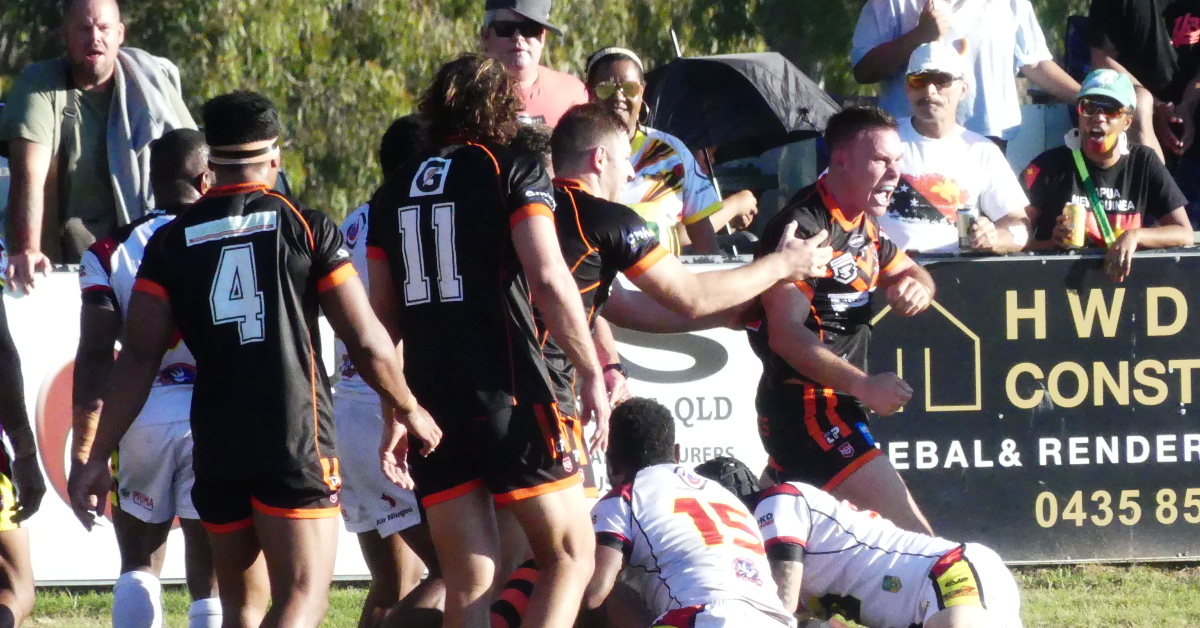 The PNG Hunters finished with nine men on the field in their 40-12 loss to Brisbane Tigers at Bycroft Oval in one of the Intrust Super Cup’s most eventful matches in years.

The Hunters had three players sent to the sin-bin in the final nine minutes and second-rower Benji Kot sent off in the 57th minute after losing another to the bin for 10 minutes earlier in the half.

The first to be banished was centre Brandon Nima, along with the Tigers’ Sam Lavea, in the 43rd minute. Only four minutes after the pair returned to the field Kot was dismissed for lifting in a three-man tackle with the Tigers leading 24-12.

Already down to 12 men, forward Samuel Yegip was binned for a tackle in the 73rd minute. Two minutes later, Sylvester Namo was given an early shower after a brief dust-up with an opponent and when halfback Charlie Simon approached the referee to question the decision, he was also given an early release, accusing him of dissent.

On top of those dramatic moments, the PNG side that is in residence on the Gold Coast lost two players to injury – centre Jokadi Bire, who was in fine form before coming off with a rib injury in the 72nd minute, and interchange forward Emanuel Waine (calf) after 51 minutes.

The Hunters, confronted by mostly minor injuries to several players, had surprised their opponents by fielding former Tigers veteran hooker Tom Butterfield, who had played the past three seasons with Wests Panthers in the Brisbane Rugby League competition. The 32-year-old played 19 minutes to give Wartovo Puara some respite in his club record 115th appearance.

And if that wasn’t enough action, watching in the grandstand were 47-game Hunters servant Stanton Albert and 22-year-old newcomer Gilmo Paul, who had this morning ended two weeks of quarantine in Brisbane after having been given exemption to leave PNG to join the injury-hit squad.

Yet coach Matt Church wasn’t blaming the remarkable events of the second half for his side’s defeat, admitting the Hunters’ poor kicking game and inability to apply any concentrated pressure was the main reason for their downfall after the scores were locked at 12-12 at half-time.

“The game was starting to slip from our grasp before that [the player dismissals] – we couldn’t build pressure, didn’t kick well enough and get to the end of sets,” Church said.

“We should have scored more points in the first half and didn’t give ourselves a chance to mount pressure in the second half.”

Church said the Hunters rallied despite being down on numbers, cracking only in the last minute when the Tigers scored against nine men.

“I’m proud of the way our guys dug in when we were down to 12, then nine men. We defended for the last part of the match four men down as the Tigers tried to catch us short,” Church said.

The Hunters began well and led 6-0 after 10 minutes when winger Norman Brown finished off a well-constructed play to the right, ducked under a tackle and scored close to the posts.

The Tigers replied in the 16th minute in the set after a Darren Nicholls 40-20 kick, with centre Linc Port crossing on the left edge.

The Hunters regained the lead in the 27th minute through Bire with Simon’s conversion making it 12-6. The Tigers levelled with a try 10 seconds before halftime to halfback Nicholls after the Hunters had twice turned over possession in their own half.

The momentum had swung the Tigers’ way with tries scored by Aaron Pene and Jordan Grant three minutes apart in the 51st and 54th minutes to give them a 24-12 break. With Kot sent off soon after, the Hunters had little chance of salvaging the game and they were behind 36-12 before their numbers dramatically dwindled in the final minutes.

Church is delighted to welcome into his squad Kumuls international middle forward Albert and centre Paul who was impressive during the Hela Wigmen’s premiership season in the Digicel Cup last year.

“It will be really good to have them in and around the group,” Church said.

“I’m looking forward to seeing Gilmo in the Hunters’ set-up for the first time and Stanton has been around at this level for a while and his experience and enthusiasm will be valuable for us as some of our guys are getting used to the game the pressures of Intrust Super Cup football.”

The Tigers will host the Redcliffe Dolphins at Totally Workwear Stadium for their Round 7 match – Sunday 16th May, 3pm.

You can watch the Hunters v Tigers match highlights here.

The Brisbane Tigers notched their second win of the season after defeating Central Queensland Capras 20-16 in their Round 5 BHP Premiership match.

With both sides looking to claim their second win of the season, the Tigers started the first half the way they finished last week’s Round 4 clash against the Townsville Blackhawks, with absolute dominance.

It didn’t take the home side long to capitalize on a Capras error 10 metres out, with the Tigers’ first points coming in the fourth minute of the match through Tigers Jessikah Reeves.

Tigers continued their dominant start when captain Kathrine Moore crashed over the line off a Tayla Eldridge ball in the 13th minute.

It didn’t take long for the Capras to hit back after forcing a Tigers error 10 metres out from their try line and scored their first points through winger Krystal Sulter three minutes later.

Capras continued their momentum, forcing an error from the Tigers side 20 metres out from their try line, with a Chelsea Baker conversion putting the away side in the lead for the first time in the 27th minute.

Lucy Cuppari put the Tigers back in the lead in the 33rd minute through a slick draw and pass from halfback Tayla Eldridge.

The Tigers side continued their dominance in the beginning of the second half when Capras winger Bree Spreadborough was almost certain to score in the corner, but Tigers winger Sierra Maple produced the night’s best cover tackle forcing her into touch.

It took 17 minutes for the first points to be scored in the second half through Capras’ Mackenzie Reid. Baker converted her second try of the evening, giving the away side the lead once again in Round 5’s seesaw battle.

The match appeared to have slipped away from the home side with continuous errors until a spirited dummy from Tigers hooker Kelsey Parkins locked the scores with eight minutes to go.

In what was the last turn the seesaw took, the home side sealed the victory in the 65th minute through a Emily Veivers try.

Tigers coach Adrian Vowles said his side started off really well but lost their way a little bit before coming back from behind to get the win.

“It was really important that we got the win tonight, not just for our finals hope but for our own team morale,” Vowles said.

“We need to capitalise on tonight’s performance going into next week.”

Tigers hooker Kelsey Parkin, while ecstatic with the win, replicated coach Vowles’ words stating “our performance still needs a bit work but I am happy with the whole teams effort levels to secure the win.”

The Tigers will face the Valleys Diehards at Emerson Park for their Round 6 match – Saturday 15th May, 3pm. This match will be broadcast on QPlus, QRL.com.au, Intrust Super Cup App and QRL Facebook Page from 2:50pm.

You can watch the Tigers v Capras match highlights here.

The Suzuki Brisbane Tigers celebrated their third win on the trot after a Western Mustangs demolition in their round 4 clash at Jack Martin Oval.

In wasting absolutely no time, the Tigers dominated from start to finish scoring in their 1st, 2nd, 3rd, 4th and 5th set of the match.

Coach Mark Gliddon was extremely pleased with his sides performance and commended all players on a great team effort.

The Tigers will host the Redcliffe Dolphins at Totally Workwear Stadium for their Round 5 match – Sunday 16th May, 1:00pm.

Bulimba had a bye over the weekend, but will face Wynnum Juniors at Kitchener Park for their Round 5 match – Saturday 15th May, 4:30pm.

Brisbane Tigers contracted players Kea Pere, Ioane Seiuli and Brayden Torpy all were point scorers in the round 4 clash.

Carina will host Pine Rivers at Leo Williams Oval for their Round 5 match – Saturday 15th May, 6:00pm.