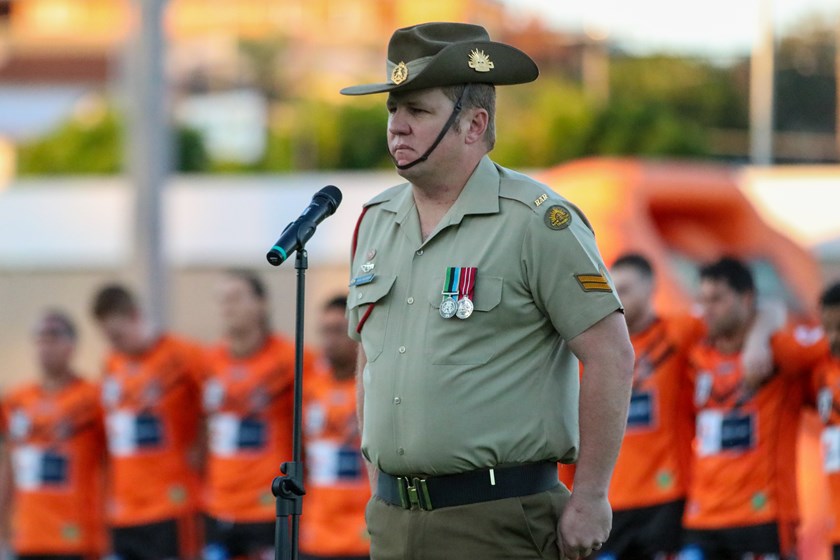 Weekend Wrap Up: Celebrating Anzac Round & Past Players and Officials

Wynnum Manly Seagulls overcame a poor start to the match to earn a 22-14 win against Brisbane Tigers and in the process, keep their unbeaten start to the season alive in the Intrust Super Cup.

Played at Totally Workwear Stadium in Anzac Round, the Tigers roared early in front of their home fans, with Dean Ieremia – who recently claimed Hastings Deering player of the match honours with his hat-trick against Burleigh Bears – going over in the fourth minute to score the first of his two tries.

It only took him eight minutes to go over again, and when Dan Russell crossed in the 20th minute; Seagulls fans would have been wondering if their team had turned up focused to play.

The tide soon turned however with winger Ed Burns starting the comeback for his team with a 29th minute try, before Sebastian Winters-Chang got on the board in his Intrust Super Cup debut.

With conversions hard to come by, the Tigers took a 14-8 lead into the half-time break.

Unfortunately for home fans, the Tigers were held scoreless in the second half as the Seagulls clicked into gear, doing just enough to overcome their opposition with tries to powerful forward Luke Bateman and then crafty hooker Jayden Berrell, who has been in fine form in the competition, sealing the victory when he crossed in the 60th minute.

For Wynnum Manly coach Adam Brideson, the result came as a relief after a disappointing start to the match.

“It was obviously really pleasing in the back end; we didn’t start the game anywhere near the way we wanted to,” Brideson said.

“I thought the Tigers were really clean for the first 20-odd minutes. I was really pleased by the fact we could fight really hard and come away with a hard-fought win at the back-end of the game.”

The result means the Seagulls remain undefeated after five rounds, something the coach said was being achieved thanks to the standards of the players.

“There’s a really honest group here that work really nice and hard for each other, so if we miss our marks somewhere, they are really happy to check each other and make sure they are continuing to work nice and hard to try and get the best outcome every week,” Brideson said.

Next weekend, all Intrust Super Cup teams will have the weekend off, with Brideson saying he would take the opportunity to freshen up the players.

“It will be good to get them away, we will train only a couple times this week and give them the weekend off and get away from footy and give them something else to think about,” Brideson said.

“Then, we will get back in to get stuck into the Capras after the bye.”

For the Tigers, it was a disappointing finish to the game after the side had been building winning momentum with two strong wins in a row.

You can watch the Tigers v Seagulls match highlights here.

West Brisbane Panthers celebrated their first win of the season with a gusty display against Brisbane Tigers, coming away with a 20-14 win at Totally Workwear Stadium.

The Round 3 match also saw the long-awaited return of Harvey Norman Queensland Maroons centre Julia Robinson to the team, who in her first game back this season, played as five-eighth for the first time.

The Panthers skipper took it all in her stride and was named the Hastings Deering player of the match for her overall performance.

In a close match, it was the Panthers who started the scoring, with young gun centre Sera Koroi crossing for the first of her two tries in just the ninth minute; before the Tigers hit back when five-eighth Tahlia Rolph went over for a four-pointer in the 21st minute.

Koroi was in again however only three minutes later and Mackenzie Weale’s try in the 30th minute helped the visitors get out to a 14-4 lead at the break.

Lana Sheedy, who kicked two conversions in the match, also picked up a try to kick-start the second half; with late efforts from centre Shae De La Cruz and young prop Jayda Lofipo coming too late for the Tigers who were out to claim back-to-back wins.

For Panthers coach Craig Green, the win was welcomed, but he knew there was plenty to work on before his side took on Tweed Seagulls in Round 4.

“A win is a win; it was a pretty ugly win,” Green said after the match.

“We didn’t complete as many sets as we would have liked and we played some really dumb footy – but at the end of the day, the commitment was there, and we came away with the win.”

However, he was proud of his team and knew the hard work they put in now would pay off later in the season and beyond.

“They are a young side. We have got about 10 players who are aged 21 and under,” Green said.

“So, whilst we haven’t won many games this year, we are going to be strong for the rest of this season and more importantly, into the future.”

The Tigers will face the North Queensland Gold Stars at Jack Manski Oval for their Round 4 match – Saturday 1st May, 3pm. This match will be broadcast on QPlus, QRL.com.au, Intrust Super Cup App and QRL Facebook Page from 2:50pm.

You can watch the Tigers v Panthers match highlights here.

The Suzuki Brisbane Tigers celebrated their second win of the season with a second half scoring spree against the Wynnum Manly Seagulls, coming away with a 32-22 win at Totally Workwear Stadium.

Only two points separated the two teams at half-time (Tigers led 12-10), before Tigers Co-Captain Eli Daunt and forward Justin Smith crashed over the try line in the 45th and 51st minute respectively.

Wynnum fought back with two consecutive tries in the 56th and 61st minute which put them back into the 2-point ball game.

Tigers workhorses Ronald Philitoga and Solomona Faataape put the game beyond doubt scoring in the 72nd and 75th minute of the game.

Next weekend, all Hastings Deering Colts teams will have the weekend off.

This gives Bulimba their second win of the season and puts them in 4th position on the ladder, sitting just behind Valleys (based on differential points).

Bulimba have a bye next weekend, but will face Wynnum Juniors at Kitchener Park for their Round 5 match – Saturday 15th May, 4:30pm.

Carina Tigers were 20 seconds away from claiming their first win of the season before Wynnum Juniors stole the Round 3 victory at Leo Williams Oval.

Coach Jason Di Lizio will be looking for a stronger performance from his side in next week’s clash against last year’s minor premiers, Valleys Diehards.