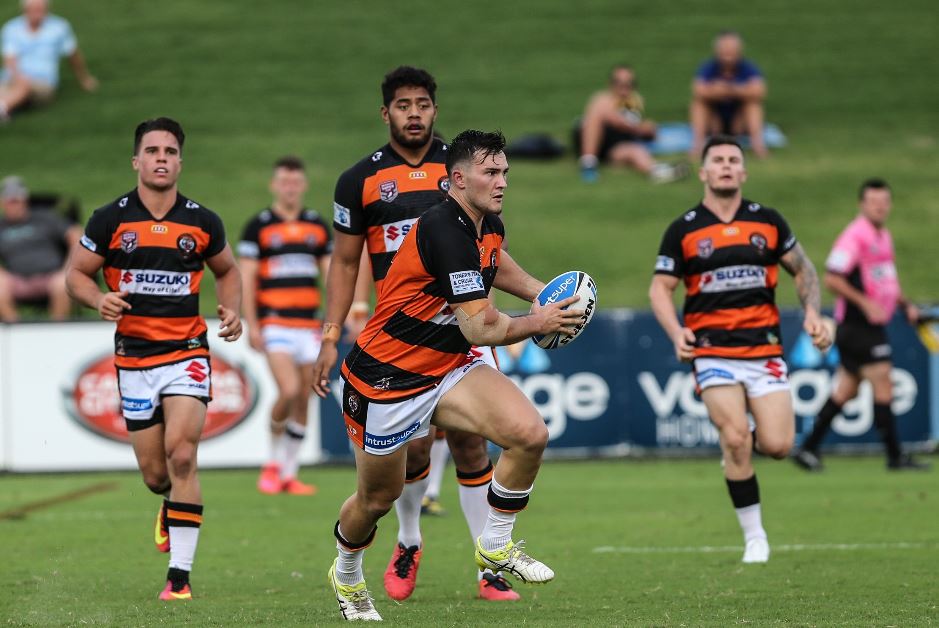 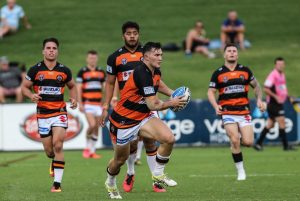 The Falcons and Tigers opened the 2017 Intrust Super Cup with a typical early season encounter. The 7-7 score line was an apt reflection of the game as both teams defended mightily but failed to complete the attacking opportunities they created.

It was the Falcons who scored first in the 25th minute. Guy Hamilton passed to Eddie Tautali who made a clean break and then, as the defence converged, kicked ahead. Tiger’s fullback Linc Port recovered the kick but a fantastic chase by Tautali and Jake Turpin saw him pushed in goal. From the ensuing drop out the Tigers sent the ball 40 metres, however back-to-back penalties allowed the Falcons to get back down field quickly. Hooker Alex Bishop, who was among their best all day, scooted from dummy half and deftly placed a kick off the outside of his boot for winger Matthew Soper-Lawler to score.

The Falcons left side of Justin Olam and Soper-Lawler looked dangerous all day and the Falcons will be hoping they get to see more of Storm player Olam so the two can build on a promising start. Bishop very nearly set up another try with the same kick, only for Olam to called offside.

The Tigers best attacking opportunity of the half came when Charlie Galo made a break up the middle of the field and off loaded to fellow Storm contracted player Scott Drinkwater. Drinkwater slipped the pass to a flying Gerard McCullum, who was in the clear, however the ball drifted forward.

Both teams would have gone to the sheds frustrated with the amount of dropped ball and penalties, particularly the Falcons who had the Tigers pinned in their danger zone for long periods of the half.

Interestingly both coaches took the same message to their respective teams at the break ‘hold the ball and we will win’.

It was the Tigers who started the second spell with more energy in both attack and defence and in the ninth minute Jack Svedsen scored their try. Billy Walters held the ball back till the last minute before slipping it to Svedsen, who was running a beautiful unders-line in attack, and used his size and strength to crash over on the Falcons left edge. Walters slotted the conversion and for the first time the Tigers had the lead.

Both teams had their chances as the half wore on, however they both suffered from an inability to finish their sets effectively. They were generally able to work through five plays (allowing for the odd dropped ball or penalty) however poor kicks and last play penalties soured either sides chances of scoring.

An action packed last five minutes saw the teams trade field goals (Brodie Croft in the 74th minute and Guy Hamilton in the 77th minute) as they searched for the win.

With the scores level the game came down to a frantic final minute. The Tigers set up professionally for another shot at goal, on the third tackle. However, an equally professional Falcons defence could see what was coming and rushed Brodie Croft ensuring he could not get the shot away. The defence then rushed again on the next tackle, ensuring no other Tiger would get a shot on goal. The Tigers spun the ball left and then right looking for one last chance, however it was not to be found.

The Falcons best on the night were Alex Bishop, Tui Kamaikamica and Jake Turpin, while for the Tigers Scott Drinkwater and the ever-reliable Tommy Butterfield led the way.