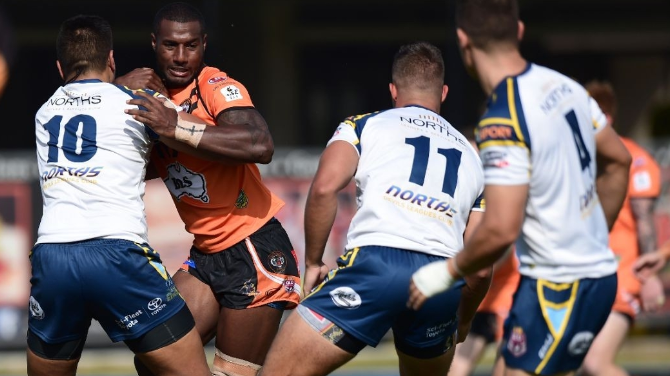 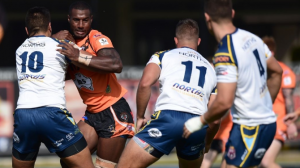 Easts Tigers displayed great character to claim an enthralling 14-all draw against the Norths Devils at Suzuki Stadium, Langland’s Park on Easter Saturday. A week ago the Tigers scored a 78th minute victory against the Mackay Cutters, however they could not repeat the effort this week as Norths held on for the draw.

With a 12-9 penalty count, the Devils had the vast majority of the field position and ball possession, and forced the Tigers to drop-out on 7 occasions.

The Devils were much better in the first half and really should have been further ahead with the Tigers having spent the entire final 15 minutes of the half defending in their own 20m.

Winger Leon Ellia-Niukore opened the scoring for the Tigers in the 3rd minute, when he got on the end of a superb Brentt Warr cut-out pass to score in the can bar corner. Billy Walters converted and it was 6-0 to the Tigers.

The Devils responded with tries to winger Maeli Seve in the 35th minute and centre David Faamita in the 38th minute, which along with a half-back Todd Murphy conversion, gave them a well-deserved 10-6 halftime lead.

At halftime Devils coach Mark Gliddon felt that with the amount of defending the Tigers had had to do they must tire and his team would and said “come home with a wet sail and get over them in the last 20”. It very much proved to be the case, with Todd Murphy having the chance to slot a goal to claim the win as the full-time hooter sounded in the background.

The Tigers struck early in the second half, just as they had done in the first half, with Luke Lavelle going 60m to score off a perfectly worked scrum base move down the left edge. The ever dangerous Jake Foster was there to gallop 10m before offloading to Lavelle. Billy Walters once again converted from the sideline and the Tigers had re-taken the lead at 12-10.

For the next 10 minutes both teams traded blows, with neither team bothering the scoreboard attendant before Murphy stepped up, popping a short ball for a hard running Rhett Webster to score on the right edge and taking the score to 14-12.

Murphy was the Devil’s best on the day. His general kicking game was superb and he was at the heart of much of their attack.

Young fullback Trae Clark looked dangerous every time he ran with the ball and showed why he is so highly regarded on the northside.

For the Tigers, Jake Foster has another fantastic game, both with the ball in hand as well as the work he does off the ball.

Both teams had plenty of opportunities in the second half to win the game and the coaches will be talking to their players long and hard about closing-out games. In the end, a Walters’ penalty goal in the 78th minute took the score to 14-all and that was where it finished.

The Tigers will be sweating on the fitness of fullback Javarn White, as they prepare for next week’s trip to Rockhampton. The newest Tiger has been showing signs that he is working his way back to his best and has fast become a key component of the Tigers backline.

The Devils return to Bishop Park to face the 3rd placed Burleigh Bears, who got back in the winner’s circle with a 36-18 win over the Mackay Cutters.