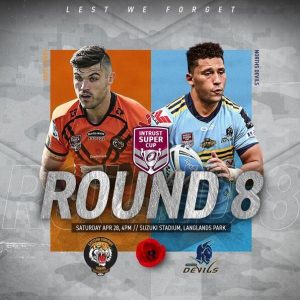 Devils halfback Todd Murphy requires six points to bring up 500 in the Cup.

Murphy added to his tally last week with two goals against Townsville, who came away with a 30-16 win.

It was only the Devils’ second loss of the season, with Rohan Smith’s team still nicely placed in fourth spot heading into this weekend’s Anzac Round.

Easts are sitting just outside the top six after their 24-12 loss to Tweed Heads at Piggabeen in Round 7.

Sam Tagataese will play with Norths Devils this weekend, having dropped out of the squad due to Wynnum’s Payne Haas making his debut for the Broncos.