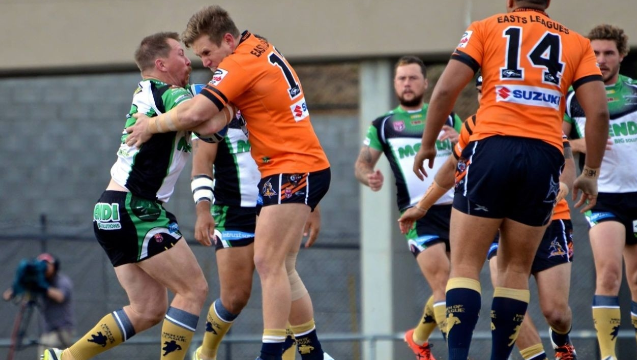 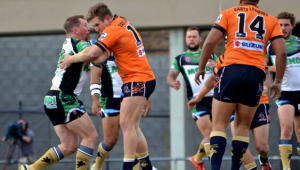 Here is a riddle for you – when is a draw not a draw? Answer – When the draw comes against The Best team in the competition.

Coming in to this weekends’ Round 19 clash the Townsville Blackhawks were the benchmark for the 2015 Intrust Super Cup. Their attack was 112 points better than the second best attack and their defence was 65 points meaner than the next best defence. They leave round 19 with those statistics in tact but without the satisfaction of having beaten the Tigers.

Coming into the game few, outside of the Tigers faithful, gave them any chance of a win; in fact only Peter Psaltis amongst the Intrust Super Cups official tipsters gave the Tigers any hope.

However someone forgot to tell the Tigers players and coaching staff that they were meant to lose and they will reflect on a plethora of positives to come out of this result.

They started the game with an aggressive, fast paced game plan that the Blackhawks simply could not keep up with. They opened the game with quick tries to Donald Malone and Shaun Nona, with Nona’s try coming off the back of a sensational 50m run from Felise Kaufusi. He swooped on a Blackhawks dropped ball and set off downfield before releasing Shaun Nona to score under the posts. With only seven minutes gone the Tigers were outpacing the clock at 10-0.

The Blackhawks are a very good team though, there is a reason they sit alone atop the Intrust Super Cup ladder and they were not to be held at bay for long. Late inclusions Robert Lui and Glenn Hall were soon into their work and reminded everyone why they have both played plenty of NRL. Hall, Ricky Thorby, Kyle Feldt and Michael Parker-Walshe all scored first half tries for the Blackhawks and with Feldt kicking the goals they had advanced their score to 22 by the break.

Shaun Nona showed last year that he is at his best when he runs with the ball in hand and on Sunday he appeared like a man unshackled as he simply ran and ran. He combined with Kaufusi and Shane Neumann to position Donald Malone for his second try and was at it again for the Tigers last try of the half, a near certainty for try of the year, scored as the siren roared in the background.

Tommy Butterfield initiated the movement with another of his trademark powerful bursts from dummy half before linking with Jake Foster and Neumann down the grandstand touchline. Neumann passed to Nona, who knowing the siren was about to blow, ran and jinked and dodged defenders as he searched for someone to pass to. In the end, unable to find anyone in a better position, he deftly kicked for debutant Brandon Downey to score in the corner. Nona then converted from the sideline and the Tigers had snatched a seemingly unlikely 28-22 lead at the break.

Butterfield was the XXXX Man of the Match for the second week in a row and is in career best form both in attack and defence. It seems inconceivable that the QLD Residents hooker will not be part of an NRL set up in 2016.

The opening 20 minutes of the second half was marked by petulance and ill disciple with Mosese Pangai lucky to only spend 10 minutes in the bin. The judiciary will be busy reviewing the two acts he was placed on report for.

Once the two sides settled down the sparkling exciting play of the first half returned and the points flowed. Francis Taulau and Brentt Warr combined superbly to put the Tigers on the attack 20m out from the Blackhawks line. Tommy Butterfield then worked a brilliant set play with Troy Giess as a decoy to send Liam McDonald barging over for the try, which Nona converted to extend the lead to 34-22.

The Blackhawks struck straight back though, with tries to Zac Santo and Parker-Walshe, his third, to retake the lead (40-34) and set up what would be another exhilarating finish to a Sunday afternoon at Tapout Energy Stadium.

This Tigers team have shown repeatedly this season that they are physically and mentally tough, determined and not a team to close up shop when the going gets tough. Despite being a try behind the best defence in the competition they were undeterred and threw everything they had at the Blackhawks. Michael Kai brilliantly snatched a short kick off out of the hands of the Blackhawks to ensure the Tigers would enter the closing minutes of the game on attack at the right end of the field.

With 34 seconds on the clock they got their reward with Donald Malone doing his best Foisa Peni impersonation as he dived over from dummy half to score under the black dot and send the home crowd into raptures. The ever reliable Nona calmly slotted the conversion to seal the 40-40 result.

There can be few better advertisements for what is so great about Tigers football and the Intrust Super Cup than this game. A win would have been nice but the Tigers will reflect on a wonderful game, with plenty of positives. Tiger fans will wait with baited breath for the next home game at Tapout Energy Stadium, also the last home game of the year, the always vigorous local derby with the Wynnum Manly Seagulls in Round 25.