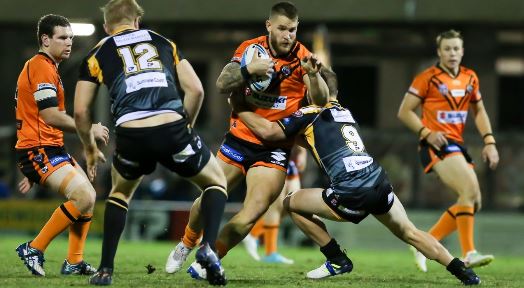 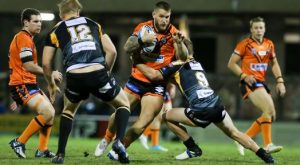 The Easts V Sunshine Coast rivalry is fast becoming one of the most intense in the Intrust Super Cup.

This is familiar, brother versus brother, at its best.

In Round 1 it produced a stunning 7-7 draw at Sunshine Coast Stadium and in the return fixture at Suzuki Stadium, Langlands Park, on Saturday night it looked to be going the same way, till a 79th minute field goal by Brayden Torpy secured a win 17-16 for the Tigers.

Much of the pre-game talk surrounded Melbourne Storm recruit Nate Myles, who played a solid 50 minutes for Easts, uninterrupted, in his Intrust Super Cup debut. The Maroons and Australian veteran was eager from his first touch, running the ball hard and making plenty of metres. He was a bulldog in defence, tackling everyone that came near him and he slipped out three offloads in, perhaps, a sign of the kind of forward Storm coach Craig Bellamy wants him to be.

The Falcons appeared to race away with the match in the early stages with tries to Justin Olam (5th minute) and Samuel Wright (7th minute) and a Guy Hamilton conversion seeing them open a 10-0 lead after only 8 minutes. Olam scored on the left wing when a cheeky pass from Christopher Lewis down a narrow blindside caught the Tigers defence napping. The second try was all luck, an innocuous Guy Hamilton kick took a horrendous bounce for Gerard McCullum and stood up straight into the hands of Sam Wright who was quick enough of mind and foot to capitalise and score untouched.

Led by Tui Kamikamica and veteran Liam McDonald the Falcons forwards were dominating the middle of the field and were making plenty of metres.

The Tigers finally struck back in the 14th minute when a well-executed scrum-base play saw the ball spun from left to right across the field to Gerard McCullum who straightened the attack and set Linc Port off for the corner. McCullum was at it again in the 36th minute when he swooped on a loose ball and drifted across field before throwing a ridiculously long pass to Jarrod McInally. The Falcons defence had all crammed infield to shut down the Tigers, leaving McInally unmarked on the grandstand touchline. Brayden Torpy slotted the conversion and the two teams went to the sheds locked at 10-10.

The Falcons had opened the game in a hurry, however the Tigers pack slowly gained control and by half time were dominating their opposition.

Christopher Lewis scored the first try of the second half when he took the ball from dummy half in the 50th minute and muscled his way through the Tigers defence. Guy Hamilton slotted the conversion to take the score to 16-12.

It was a high quality second half with both teams conscious of completing their sets well and not making mistakes.

With seven minutes to go and everyone in the crowd on the edge of their seats and with vision of Round 1 flashing before spectators’ eyes, the Tigers set up a grandstand finish with a terrific try that was finished off by Adam Crear. Crear broke the line and burst down field, running free down the left to score. Torpy missed the difficult conversion and the scores were all locked up at 16-16 with the clock winding down.

The two teams then went back into arm wrestle mode before Torpy slotted the winning field goal with 60 seconds to go, to close out one of the highest quality games of the season to date.

The best on the night for the Tigers were Mat Pittman, Gerard McCullum, Brayden Torpy and Jack Svenson, while for the Falcons it was Guy Hamilton, Jon Grieve and Jye Ballinger.