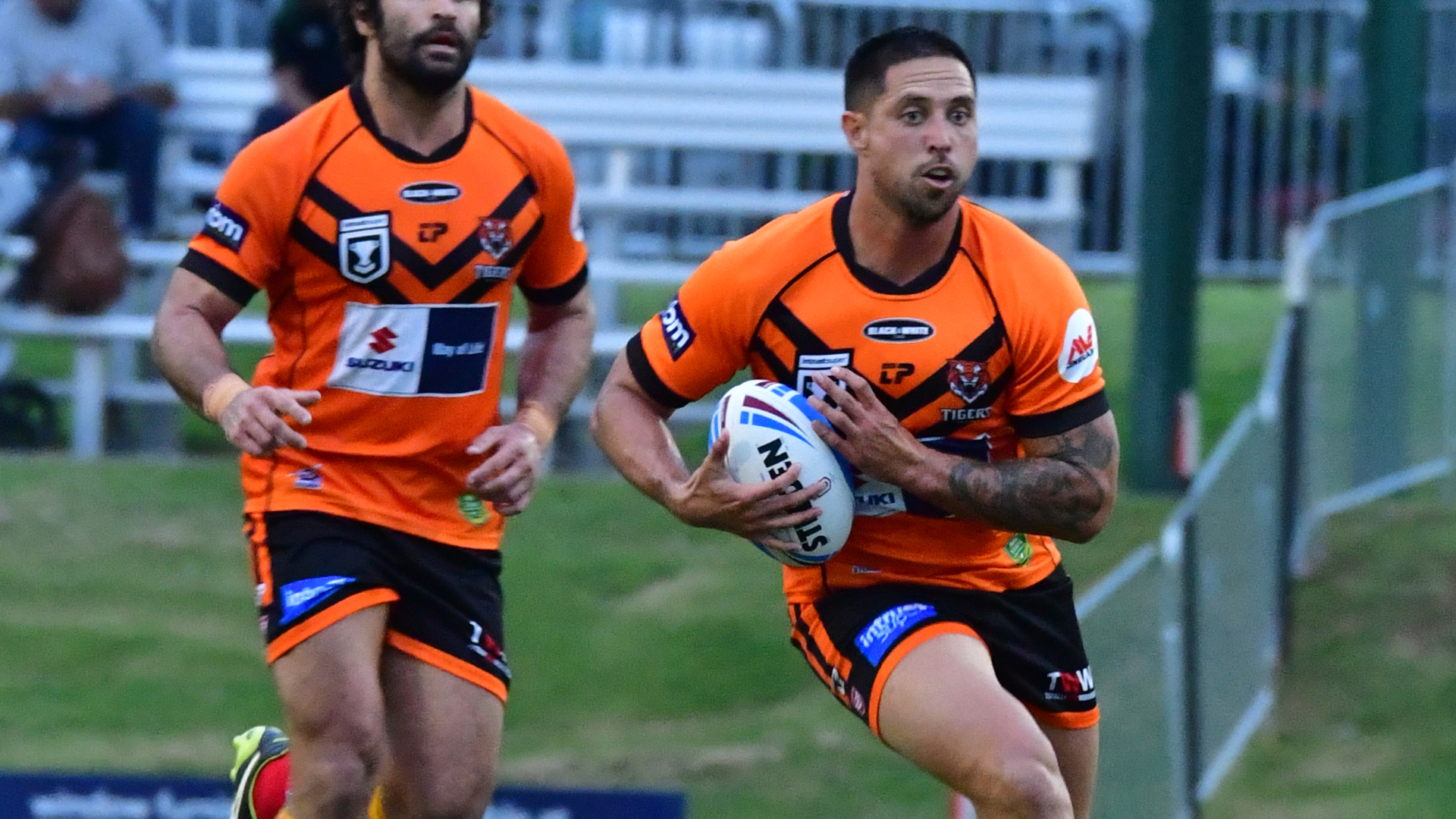 Weekend Wrap Up: Tigers celebrate 4 out of 4 wins

The Brisbane Tigers may have changed their name but the rivalry between Tigers and Ipswich Jets remains the same as it always has been.

The Tigers came to Ipswich fierce and prowling the North Ipswich Reserve stalking their Ipswich prey with a dominate first 20 minutes led by Brenko Lee and Gerard Beale, and hooker Aaron Booth pulling the strings from dummy half.

It took 10 minutes before the Jets showed some enterprising attack and Jayden Connors dropped the ball just short of the line after going through the Tigers defence.

The Tigers were ready to counter attack and went down the other end and State of Origin star Brenko Lee scored in the right-hand corner.

Tigers fullback Gerard Beale liked what he saw because he replicated the same movement and the same result when he sliced through to score on the Tigers right hand side.

At 10-0 the Tigers had their perfect start after 22 minutes.

The Tigers dominated possession and field position with five sets in a row and it was the Tigers hooker Aaron Booth who went one way and came back the other way for William Samuel to score his third try in two weeks from his nine Cup games.

It was 16-0 and the Jets were struggling with getting out of their own end with the Jets only having one attacking set.

The Jets earned the right to attack and put the ball to good use with the ball going wide to the Jets’ right and Richie Pandia had his 33rd try for the Jets in Cup game 104.

Josh Cleeland kept the momentum going with two points and the Jets were clawing back some score at 16-6.

The fight back was under way when Julian Christian took advantage of a Jets penalty and forced his way over. The Tigers had gone from 16-0 to 16-12 in 12 minutes.

Jets coach Keiron Lander would have been a lot happier at half-time when Jayden Connors chipped ahead and was taken out by Bennett Leslie who had an extra 10 minutes added to his half time to think about it.

Cleeland took the two points from the penalty and the Jets had closed the margin to 16-14 at half-time.

As the rain fell in Ipswich it didn’t cool the engines of the Jets who continued to defend their way back into the game with Connors diving on a short kick to save the Jets.

The Tigers tried again next time they were down the Jets’ end attacking, this time taking the aerial route over the top of Connors and Tigers second rower Mitch Frei climbed high and had his 46th try from Cup game 133.

The Jets continued to turn away the Tigers until hooker Aaron Booth emerged from the phone booth and showed some Superman qualities finding a way through under a pile of wet and muddied Jets to give his side some scoring space.

Booth’s super power might not be kicking, as he missed the kick, and the Tigers led by 10.

Ryley Jacks put the ball up again and the Jets left it for Tigers’ Linc Port to score the Tigers sixth and take the lead to 30-14.

Dean Ieremia scored his fourth try in two games, and iced the win for the Tigers with three minutes to go and the Tigers up 36-14.

Tiger hooker Aaron Booth was soaked but happy with the result.

“We kept it very simple, apart from a brief period when we were down a man and the Jets came back we stuck to what we wanted to do,” Booth said.

“The conditions made it hard but that’s also what makes it a good win.”

You can watch the match highlights here.

The Tigers will face the undefeated Wynnum Manly Seagulls at Totally Workwear Stadium for their Anzac Day Round 5 match – Sunday 25th April, 5pm.

The Club will also be celebrating its Players’ Reunion Day as well as Past Players’ Day.

Brisbane Tigers bounced back in Round 2 of the BHP Premiership, securing a 30-6 win over Valkyries at West Michelton’s Frank Lind Oval on Sunday afternoon.

The 24-point win came as a boost for the side following their 70-point loss to the red-hot Burleigh Bears last round.

For their match against Valkyries, the Tigers came out with a vengeance and an early try from Emily Veivers’ in the second minute of the match set the tone for the win.

Tigers coach Adrian Vowles said the team put the results of last week’s match behind them and looked to start fresh against the Valkyries this week.

“We went back to basics and worked on some things this week that we thought let us down last week and I was just stoked that we got a win after last week’s demoralising loss,” Vowles said.

The Valkyries managed to score one try in the first half, but then struggled to keep the Tigers down as Katherine Moore, Lucy Botten and Lucy Cuppari added their names to the Tigers’ scoreboard.

Vowles said he was proud of his team’s overall performance.

“We were always in control,” Vowles said. “We probably could have played more completions in the second half, but we had more confidence this week and everyone stepped up.

“I thought Emily Veivers was really good today in the centre.

“Lucy Botten got a couple of good tries, and our captain Kat Moore was outstanding and lead by example.”

You can watch the match highlights here.

The Tigers will face the West Brisbane Panthers at Totally Workwear Stadium for their Anzac Day Round 3 match – Sunday 25th April, 3pm.

The Suzuki Brisbane Tigers claimed their first win of the season defeating the Ipswich Jets in Saturday’s round 2 clash at North Ipswich Reserve.

With a 10 point deficit at half-time (Jets lead 16-6) , the Tigers had their work cut out for them in the second half.

We’re unsure what Coach Mark Gliddon told his troops at half-time but it worked wonders.

The Tigers staged a complete shut out  in the second half scoring 24 unanswered points.

The Tigers will face the Wynnum Manly Seagulls at Totally Workwear Stadium for their Anzac Day Round 3 match – Sunday 25th April, 1:30pm.

In what was an amazing win for the Tigers, they unfortunately miss out on the finals series due to the 2021 new regional format.

This year’s final series will be fought out by the top team from the four pools.

The Tigers finished the season in 11th position overall and 3rd in their pool.

Tigers contracted and Bulimba player Michael Purcell scored and converted his own two tries which handed Bulimba a 12-4 lead at half-time.

They unfortunately couldn’t capitalise on the lead with Normanby proving too strong in the second half.

Bulimba will face the winless Brighton Roosters at Jim Lawrie Field for their Round 3 match – Saturday 24th April, 4:30pm.

While it was their first hit out of the season (bye in round 1), Coach Jason Di Lizio will be looking for a stronger performance from his side in next week’s clash against a refreshed Wynnum side.

Carina will face Wynnum at Leo Williams Oval for their Round 3 match – Saturday 24th April, 6:00pm.